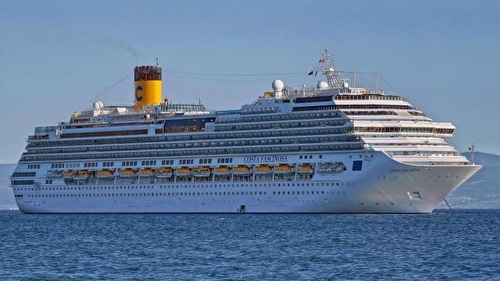 Costa Fascinosa
With the natural elegance of a diva and the charm of a work of art, Costa Fascinosa is the rising star of the Costa fleet. Enriched with precious and sparkling materials, its environments are inspired.. Read more
10 night cruise sailing from Barcelona aboard the Costa Fascinosa
Visit Savona, Marseille, Malaga, Cadiz, Lisbon, Gibraltar, Valencia and Barcelona.

One of the most celebrated former inhabitants of Savona was the navigator Christopher Columbus, who farmed land in the area while chronicling his journeys. 'Columbus's house', a cottage situated in the Savona hills, lay between vegetable crops and fruit trees. It is just one of many residences in Liguria associated with Columbus. Several cities as well as Savona claim his birth and residency, such as Genoa and Terrarossa di Moconesi. Savona is the most important city on the west coast of Italy, within reach of the seaside resorts of Alassio, Loano and Varazze.

The city of Malaga is today a bustling Andalusian tourist centre with a thriving agricultural market for the fruit and wine industries. In centuries gone by Malaga attracted the attention of some of the Mediterranean's most powerful forces, including the Phoenicians, Arabs, Carthaginians and Visigoths. The Arabs considered Malaga the Garden of Eden and built several homes there, which perhaps explains their relatively non-aggressive attitude towards the region. Before them, the Phoenicians, who first discovered the coastline, felt the same sense of tranquillity, building the first village (the origin of the name is the Phoenician 'malak') in the area. For an extensive period, Malaga was then governed by the Carthaginians, eventually abandoning it in the face of invasion by the Visigoths.

At the tip of a 9km peninsula is the Andalusian city of Cadiz perched on a limestone rock overlooking the sea. Because of its stunning position and the white-washed houses with flat roofs, the city is known as the "Silver Cup".

With the natural elegance of a diva and the charm of a work of art, Costa Fascinosa is the rising star of the Costa fleet. Enriched with precious and sparkling materials, its environments are inspired by the seductive atmospheres of great historic films, the protagonists who made them famous and the works that brought success to the most celebrated theatres in the world. Aboard Costa Fascinosa you will experience the greatest thrills of the big screen and the new adventure that is about to begin: your next cruise, brimming with wonderful atmospheres and authentic cinematic locations!

3 night cruise sailing from Barcelona aboard the Costa Fascinosa.
Departs 15 Nov 2020
from
$289*
per person twin share

3 night cruise sailing from Abraao aboard the Costa Fascinosa.
Departs 24 Mar 2021
from
$612*
per person twin share

10 night cruise sailing from Barcelona aboard the Costa Fascinosa.
Departs 05 Nov 2020
from
$1002*
per person twin share

10 night cruise sailing from Marseille aboard the Costa Fascinosa.
Departs 07 Nov 2020
from
$1002*
per person twin share

10 night cruise sailing from Savona aboard the Costa Fascinosa.
Departs 06 Nov 2020
from
$1002*
per person twin share

Ready to set sail?
Call Us 0800 22 11 14
and quote 5456891.
Email a Cruise Expert
Enquire Online »
Why Choose Cruiseabout?
Experts ready to assist in providing you with your complete cruise holiday in store, by phone or online.