Here are some Cruise Trivia questions to test your knowledge on frequently used cruise terms.

Where does the term “Lido Deck” come from?

The Lido Deck is the upper deck where the pool and buffet are situated. “Lido” is a 19th century term meaning a fashionable beach resort.

European steamship lines, in the era of multi-class ocean travel, coined the phrase to refer to the pool and sun deck area used by first-class passengers.

What is the meaning of the term “sea legs”?

Traditionally “getting your sea legs” meant the ability to maintain your balance on a pitching deck solely by shifting your weight from one foot to another, without having to hold onto something for balance. Since then, the term has evolved to include the ability to tolerate a rocking ship without getting seasick.

Where does the term “as the crow flies” come from?

In the early days, mariners often carried cages full of crows or ravens for use as aids on coastal navigation. If the sailors were uncertain of their position and bearing to a nearby land mass, they would release one of the birds, which usually flew in the shortest, most direct route toward the nearest land. Because of this, the phrase “as the crow flies” has come to mean following a straight line. 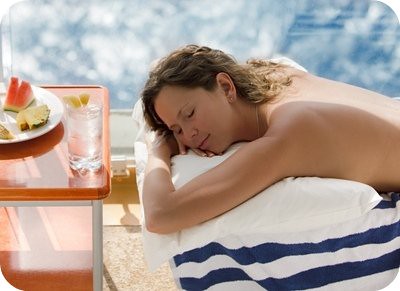 What does the big “X” on the funnels of Celebrity ships stand for?

The “X” stands for Chandris. Originally Celebrity Cruises was the upscale division of Chandris Cruises, a Greek company. The “ch” sound in Greek is represented by the letter “chi” whose alphabetical symbol is “X”.

Looking for more information on Cheap Cruises or Cruise holidays? Call a cruise holiday expert at a Cruiseabout store nationwide on 0800 22 11 14.